One sunny day, I had lunch with two South African-born Chinese (SABC) friends at a northern-style Chinese restaurant in Johannesburg’s New Chinatown. They requested that I come to this restaurant because they were curious about the food, but were unable to communicate with the people who work at this restaurant. English was these two friends’ native language, and they only spoke a little bit of Cantonese with their parents at home. They did not understand Mandarin, the dialect of the majority of Chinese migrants to South Africa, and the migrants spoke little to no English. As a result, many SABCs have found it difficult to communicate with the Chinese newcomers. On the other hand, I am a Taiwan-born-Canadian immigrant, conducting research on the Chinese restaurants in South Africa. As these two friends were excited to explore different versions of Chinese cuisines, they invited me for lunch.

Once we settled down at the restaurant, they told me what they like and asked me to order for them. I poured tea into their cups, they tapped their finger twice to express gratitude for who serving the tea. I joked that it was a very Chinese thing to do. Foods were brought to our table, we couldn’t wait to try. When one of the friends bit into a northern-style Chinese noodle, she paused and said, “Wow, this food tastes so foreign to me!”

For one second, I found this phase awkward. One minute, three of us – who look Chinese and communicated in English – were just joking about being very Chinese, then the next minute, to hear a common, everyday Chinese noodle being too foreign for her. But I quickly reminded myself that this does not mean that this SABC friend is not Chinese enough or knows nothing about Chinese food. The term, “Chinese food,” is really just an oversimplification.

Swallows Inn was opened in Johannesburg's First Chinatown during the 1940s, is considered the oldest Chinese restaurant in South Africa (perhaps the continent of Africa...).

Although Chinese people coming to Africa is a relatively new phenomenon, Chinese immigration has a much longer history in South Africa. For instance, from 1904 to 1910, more than 63,000 Chinese labourers were imported to work in gold mines around Johannesburg. Early Chinese immigrants in South Africa were predominantly Cantonese and Hakka from Guangdong Providence. Starting in the 1940s, only a limited number of Chinese were allowed to enter South Africa’s border. Then there were migrants from Taiwan during the 1970s to 90s. Today it is estimated 350,000 Chinese living in South Africa. In it, more than 300,000 are new migrants who arrived in South Africa less than 20 years ago and drew from a variety of regions, including but not limited to: Fujian, Guangdong, Guangxi, Jiangsu, Zhejiang, Shandong, Sichuan, Liaoning, Henan, Shaanxi, Heilongjiang, Jilin, and Yunnan.

In 1948, the South African state implemented a legal system of racial segregation, known as apartheid, for the next forty-six years. South African populations were officially divided into four groups: 1) “White” distinguished those said to be European descendants, 2) “Native” referred to black South Africans, 3) “Coloured” referred to people of mixed racial or ethnic origins, and 4) “Asiatic” or “Asian” referred to immigrants from Asia.

In 1971, the Republic of China (Taiwan) lost its seat in the United Nations to the People’s Republic of China (China). Meanwhile, South Africa faced international condemnation of its apartheid policy. Since both the South African and Taiwanese governments found themselves isolated from the international community, they re-established fuller diplomatic ties, which helped pave the way for the Taiwanese to become the largest group of foreign investors in South Africa. By that time, East Asian immigrants (including Taiwanese, Japanese, and South Korean) who invested in factories or had access to capital were classified as “Honorary White” and exempted from apartheid regulations. Meanwhile, Chinese South Africans were still subjected to numerous restrictions in residential, educational, and business opportunities.

In 1998, the South Africa government switched its recognition from the Republic of China (Taiwan) to the People’s Republic of China (China) and ended diplomatic relations with Taiwan. Many Taiwanese immigrants left, and their number continues to drop; meanwhile, the population of immigrants from China began to rise in the late 1990s.

The term “New Chinatown,” as mentioned in the beginning of this article, indicates that there is an old one. Most restaurants and shops in First Chinatown closed down or relocated to New Chinatown to escape crime and decay; currently there are fewer than ten businesses still operating. New Chinatown is located in Cyrildene, a formerly Jewish suburb on the eastern side of downtown Johannesburg. Most Chinese South Africans tend to support the long-established restaurants in First Chinatown. These restaurants mainly serve old-style Cantonese cuisine that tastes closer to what Chinese South Africans are used to. Recent Chinese migrants prefer to dine in the restaurants in Cyrildene’s New Chinatown. You can find almost every regional cuisine in these restaurants, as they reflect the diverse backgrounds of Chinese newcomers. The two Chinatowns in Johannesburg are not just two different spaces; they also represent regional and generational differences between old and new Chinese diasporas.

Interestingly, the so called “Canadian or Americanized Chinese food,” such as chop suey, deep-fried batter chicken in sweet and sour sauce, and fortune cookies, can also be found in South Africa’s Chinese take-away restaurants. As in North America, the Chinese food in South Africa, or what South Africans/Canadians thought of as Chinese food for a long time, was predominantly influenced by one regional cuisine in China—Cantonese. As mentioned, the majority of early Chinese immigrants to South Africa and Canada were from Guangdong, which explains why the earlier Chinese cuisine in these two countries was strongly influenced by the Cantonese style. It simply reflected the origins of the vast majority of Chinese immigrants to the country. 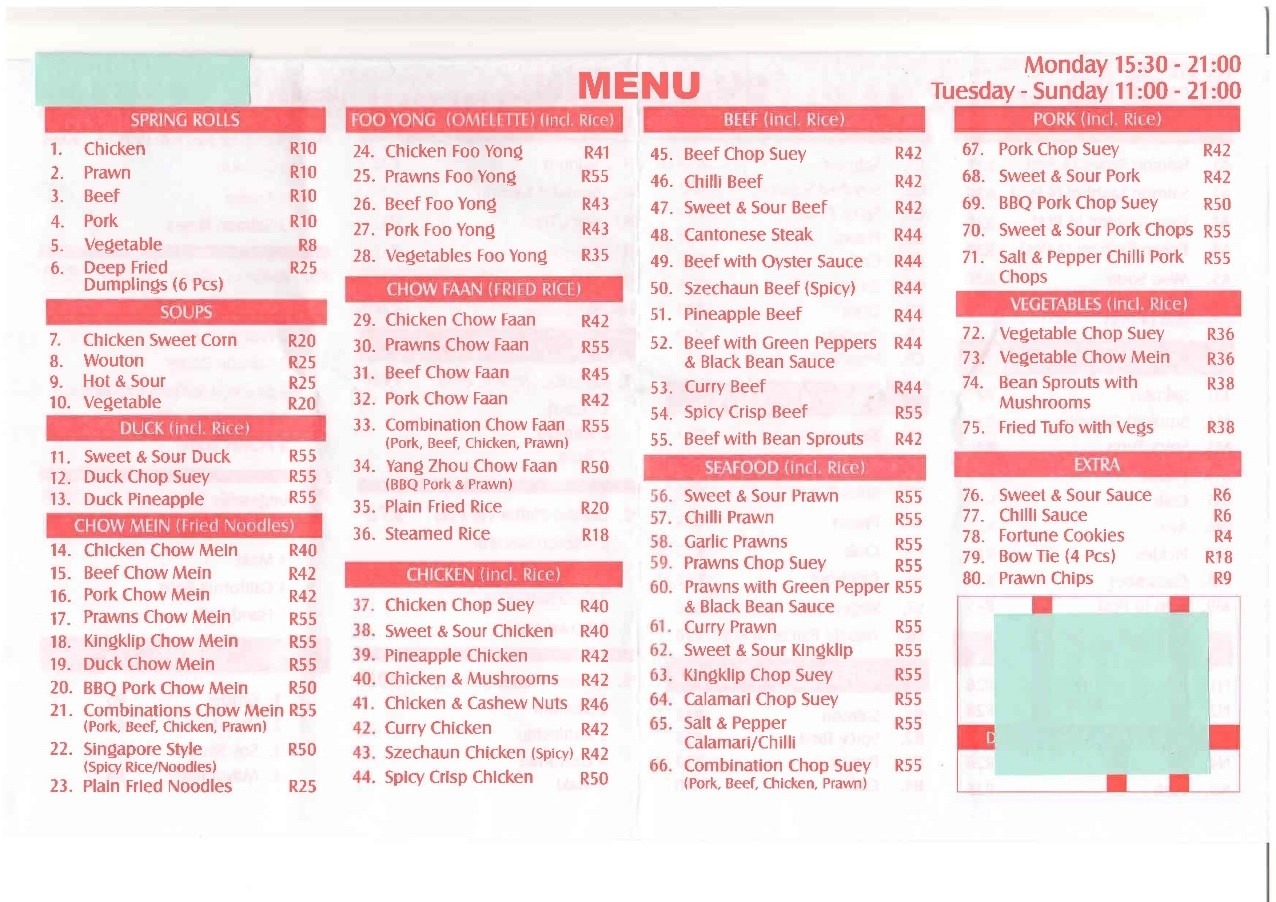 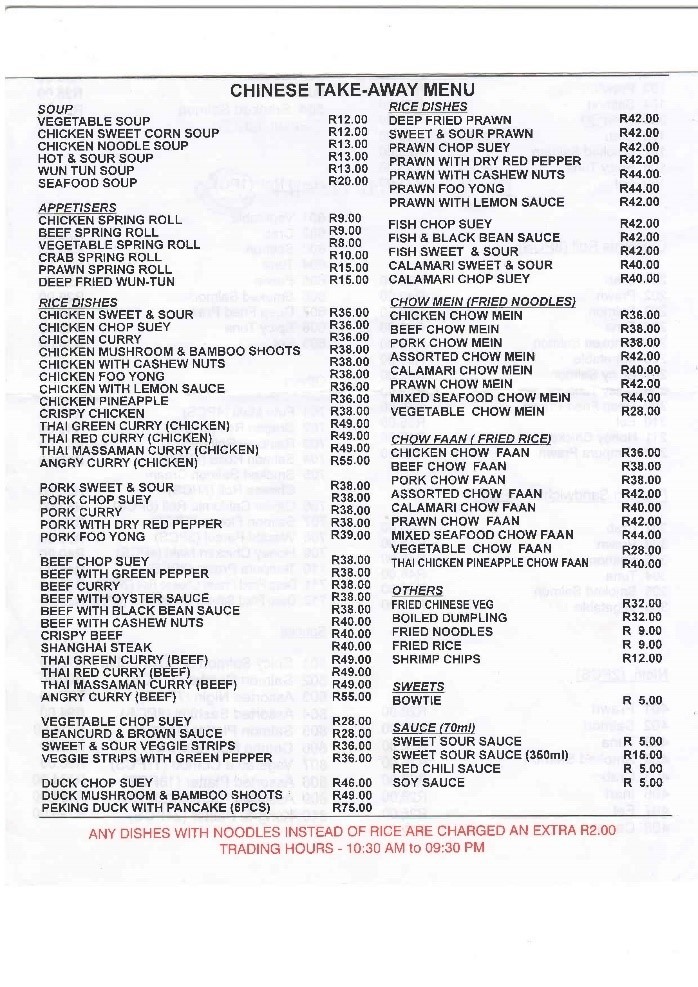 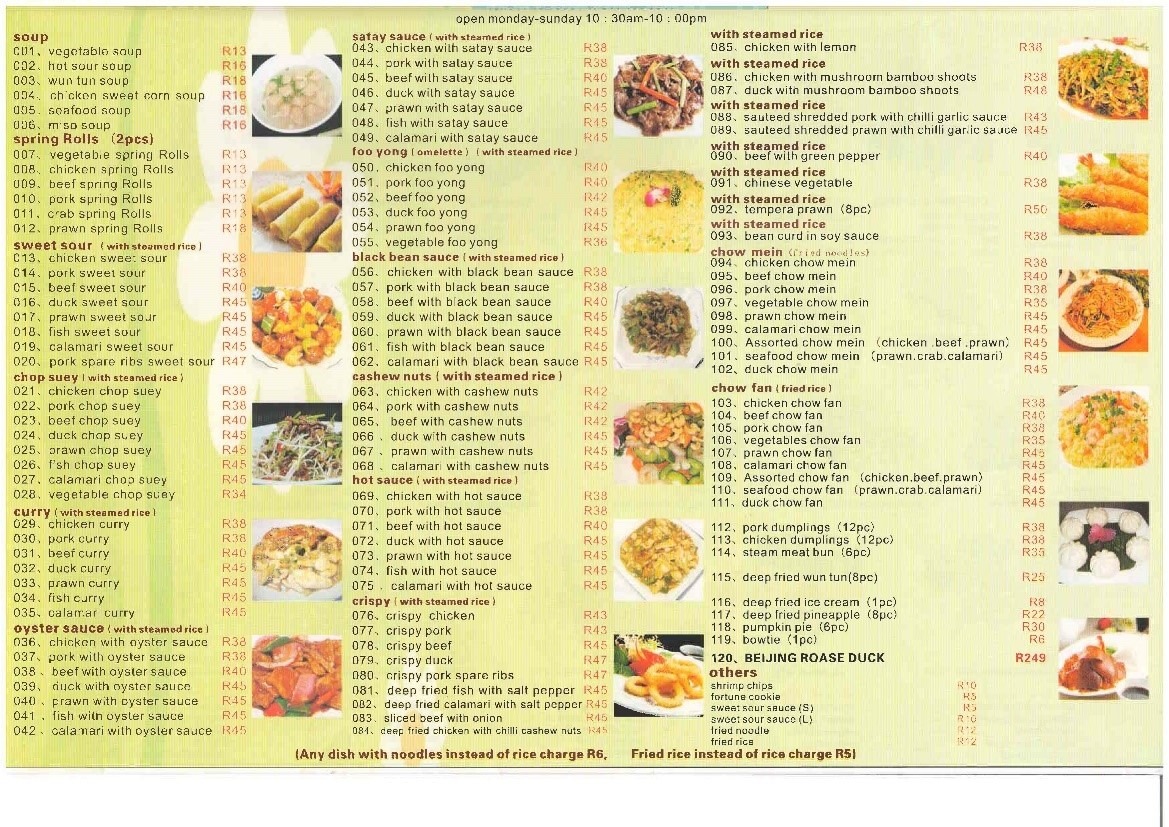 Chinese food, after all, is incredibly diverse. So are the people. Back to the lunch I had with the two SABC friends: We might look the same, eat the same food, but what we felt about the food tells us apart. From Taiwan to Canada, from Canada to South Africa, I learned that not only do migrants bring their food to a new place, people are also incredibly adaptive and creative when it comes to food. As a proudly Asian person who used to make fun of “unauthentic” Chinese food, I reminded myself that next time when I taste an unfamiliar Chinese dish, perhaps I should try to find out its origin or the story behind its modification before quickly judging it.